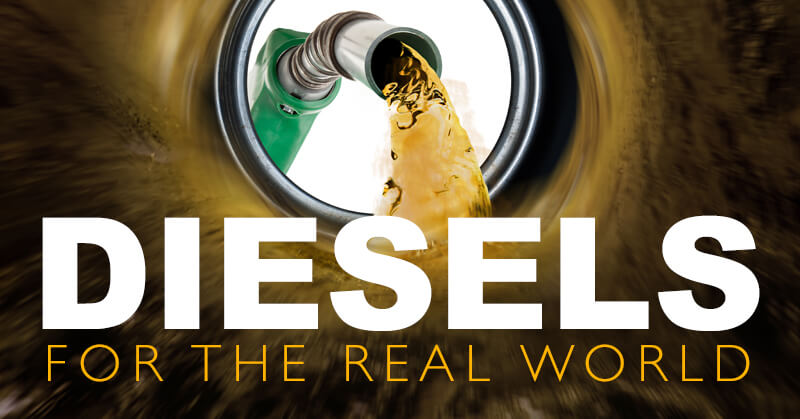 Diesels For the Real World

Do you have a diesel? If you do, you probably know what the big deal is, the seemingly unlimited mounds of power and torque, coupled with excellent fuel mileage and durability. A diesel engine, whether in a car or a truck, is an excellent choice for an everyday vehicle. At LOF Xpress, we love our diesel customers and are proud to be the diesel engine oil change specialists in Ames. We know our clients love their diesels and that is why we take great pride in keeping them running. Regardless of whether you are coming into town hauling a horse trailer or coming from across the street in your Volkswagen, LOF Xpress has your diesel oil change experts.

Diesels can get a bad rap due to the modifications that have become popular these days. A growling engine with stacks jutting out of the bed, spewing coal black smoke into the intersection, this is called “rolling coal.” It is considered, in some circles, to be the ultimate of what a diesel can become. This could not be further from the truth.

Back in the old days of the late 80s, diesels were truly coming into their own as far as being an accepted engine to use for general transportation. Of course the trucking, agricultural, railroad and heavy equipment industry has been using diesel engines for almost a hundred years now but utilizing them in passenger vehicles was vastly underestimated. During the 1970s diesel cars began appearing. VW and Mercedes were forerunners of the diesels imported to the U.S. Their compact, fuel-efficient nature gained appreciation during the gas crisis of the 1970s. By this time pickup trucks had been running diesels for a few years and were coveted for their exceptional low-end torque and the fact that they could haul much heavier loads than their gasoline counterparts. Manufacturers experimented with diesel engine design during this time and eventually developed the canon of diesel engines: the Cummins, Powerstroke and Duramax.

The Duramax actually evolved out of a 350 c.i. Chevy engine that was converted to a diesel by retrofitting a different fuel system and cylinder head configuration onto the bottom end. This was similar to what the rest of the domestic manufacturers had done to develop their diesels, cannibalize gasoline engines and see what worked. They soon realized that diesels, due to different characteristics of the diesel ignition system, needed a much stronger block design than a conventional gas engine. Thus was born the diesel specific engine configuration that we have today.

After that point an evolution really occurred in the fuel system. Originally diesel engines were very similar to the direct injection gasoline engines of today, with the fuel exiting out of the injectors and directly into the combustion chamber. In the 1990s the diesel fuel system was extremely simple, a lift pump directed the fuel from the tank up to either a distributor or inline fuel pump. The pump then, working directly off of engine timing, distributed fuel to the injectors. These injectors were designed to open when the pressure of the fuel inside of them reached a certain level. This fuel system was extremely effective but was eventually taken over by high pressure, electronic fuel systems that we have today.

The engineering that has gone into developing diesel engines in the last 40 years is staggering, but it seems only fitting that an engine originally developed to run on coal dust should blow a little black smoke now and then. The black smoke is a throwback to when truck drivers would mess with the fueling on the mechanical fuel pumps, creating an overfueling situation. The black smoke pouring out of the modified diesels is actually unburned fuel which will plug up your exhaust and empty your wallet. The ideal diesel for general use is not excessively loud and does not smoke at all, these conditions, once thought impossible, have now been realized. The modern diesels are powerful, comfortable and put out very little in the form of emissions. In fact, with with the advent of Tier 4 final compliances, diesel particulate emissions are becoming closer and closer to zero. One of the major issues that people have with diesels is the fact that the oil changes and maintenance can cost a lot more than a gasoline engine. Diesels hold much more oil, in some cases ten more quarts are needed to do an oil change, as compared to a gasoline engine. Diesels have fuel filters that are critical to the operation of the engine, and if plugged, even moderately, the filter can cause the engine to die. Fuel filters for diesels are not cheap either and should be replaced at least once a year. That being said, if you are on the fence about buying a diesel because of the maintenance, one thing should be considered: longevity. Much like marriage, in order for a diesel to last the right amount of work must be put into it. If a diesel maintenance schedule is maintained with proper oil change intervals, fuel and air filter changes, a diesel will last for hundreds of thousands of miles, at three hundred thousand miles many diesels are considered “just broken in.”

Whether you have a diesel, hybrid or a gasoline engine, the oil change experts at LOF Xpress are here to make your experience a pleasant one. Don’t forget about our early bird special to get you on your way fast and easy!